When you need a gospel piano flavor, there are a few techniques that will take you a long way.  One of those techniques is the 13 chord.

The 13 chord is a fairly easy-to-use technique.   There are a couple things to understand about it so you can use it effectively.

An easier way to think about it

The easier way to think about this chord is to look at what remains when we remove the main triad notes, G, B, and D.  We are left with F, A, C, and E – an Fmaj7 chord. Therefore, the shortcut to playing a 13 chord is to play the root of the chord in the left hand (G), and in the right hand, go down a full step from the root (to F) and play a major-7th chord based on that.

For another example, we could play a D13 as D in the left hand, and a C major-7th chord in the right hand.  Pretty easy!

When to use it

The 13 chord is a type of dominant chord.  Its main function is to make the 1-chord sound like home.  Typically, the chord built on the 5th scale note (in this case, G) is called the dominant.

There are two places this dominant-13 chord can be used to create a gospel piano feel.  The first is when playing a 5-1 progression.  In the key of C, this would be G to C.  You can safely change the G to G13 for a more gospel sound.

The second instance when a 13 chord works well is when going from the 1-chord to the 4-chord.  This use of the dominant-13 chord temporarily makes the 4-chord sound like home.   (This use is called a secondary dominant.)  In the key of C, this would mean changing the C to a C13 chord to set up an F major chord.

Since this second technique uses an altered scale note, be sure it sounds good with the melody notes before you employ it.

Watch the video below for demonstration of these techniques.  And to gain a firm understanding and use of chords, check out the Fluent Piano Chords video course.

How to fill in between piano chords 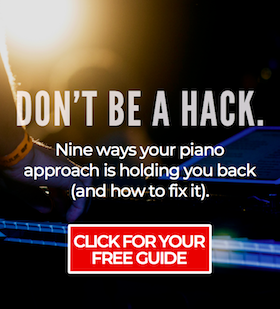 Every musician wants to reach the point where he/she is not only playing correctly, but playing … END_OF_DOCUMENT_TOKEN_TO_BE_REPLACED

An audience member recently emailed me to ask, "How do you know what to play in between piano … END_OF_DOCUMENT_TOKEN_TO_BE_REPLACED

People can argue whether Macs or PC's are the better computers.  For me, the biggest reason I use … END_OF_DOCUMENT_TOKEN_TO_BE_REPLACED

I am often asked, “What kind of keyboard do you play?” What you are seeing The keyboard in … END_OF_DOCUMENT_TOKEN_TO_BE_REPLACED

Spontaneous worship is not a new concept, but it is seeing a resurgence as worshipers seek … END_OF_DOCUMENT_TOKEN_TO_BE_REPLACED

Hi, my name is Peter Thompson. I have a varied background in music. I play keyboard, guitar, and just about every band instrument. I sing, record music, write songs, lead worship, and teach. I want this site to help you play and lead from a place of inspiration.

More about my story...