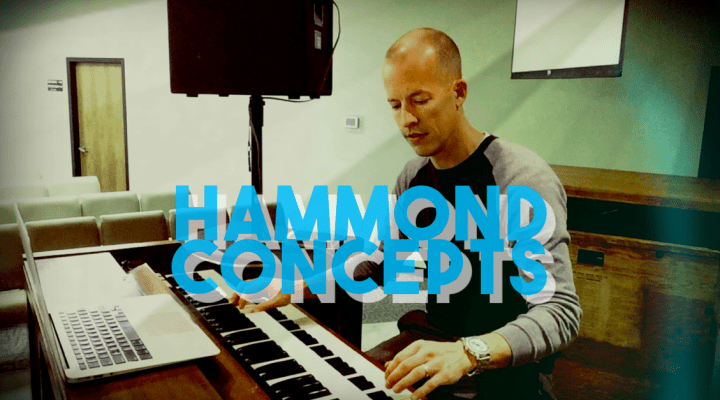 My grandma had a beautiful Hammond B3 organ in her house.  But even though I could play keyboard, I never really got an opportunity to play the Hammond.  For a couple of reasons: one, the speaker was positioned right behind my grandmother’s favorite chair.  We couldn’t really play the organ without legitimately disturbing her.

But the bigger reason I rarely played it?  I didn’t know how to turn the darned thing on!  There were two power switches and I had no clue how to work either one.

Fast forward fifteen years to when my friend John asked me, “Would the church be interested in using a Hammond organ?”  My response: “Well, of course!  But first you’re going to have to show me how to turn it on.”

Lucky for me, John was able to teach me far more about these amazing instruments.

I will never be one of those Hammond masters, using both hands and both feet to create gospel and jazz euphoria, but I have learned a few tricks for using a Hammond in contemporary worship music.

I’ll show you a few of those tricks, but I will also show you how you can have the same sort of fun without hauling around a quarter-ton instrument!

I feel like I have to include this info for no reason other than to rectify my childhood ignorance!  There’s an excellent explanation of the startup procedure here.

In a Hammond, tonewheels replace pipes, and drawbars replace stops.  Pulling out a drawbar mixes in a tonewheel.  The drawbars to the left create low harmonics and those on the right create high harmonics.

The click sounds you hear from Hammonds come from individual tonewheels kicking in at slightly different points in a key’s depression.  While this is not a characteristic you can edit on a real organ, emulations typically offer a “key click” setting to adjust the effect.

As far as mimicking a real pipe organ goes, the Hammond was fairly miserable. In that respect, Hammonds were a failure.  But along came the Leslie rotating speaker, and the combination was magical.

Leslies have three settings controlled from a switch somewhere on the organ: off, chorale (slow), and tremolo (fast).  The speaker’s momentum doesn’t change immediately, so it takes a few seconds to settle into the new speed.

Aside from not having a sustain pedal, Hammond playing technique is essentially the same as that for other keyboards.

However, there are two techniques I use to create a more authentic Hammond sound: grace notes and glissandos.  Grace notes are covered in this other video.

Glissando technique is different on an organ. Instead of using fingernails, the correct technique is to glissando using the heel of the palm, as shown in the video.  This better positions the hand to play a chord quickly.

One more thing about glissandos – they sound much better with the fast Leslie setting.

I have to admit: there is nothing that replaces playing an actual Hammond with a great Leslie right next to you.  However, virtual organs do have several advantages.

Aside from the cost, space, and weight advantages, virtual organs are far more customizable.  Characteristics that would require finding a completely different instrument are a easily changed.  For example, want more distortion without blowing the house down?  Just change the setting.  Want the Leslie to change speeds more quickly?  Change the setting.  Want more key click or a completely different Leslie sound altogether?  It’s quick and easy with software.

One of my favorite things to do with the software organ included in Mainstage is to set up preset drawbar configurations.  On a real Hammond, the presets (the other reverse-color keys) are hard-wired and poorly-set. With Mainstage, I set up the presets to instantly go to a range of tones from dark to bright.